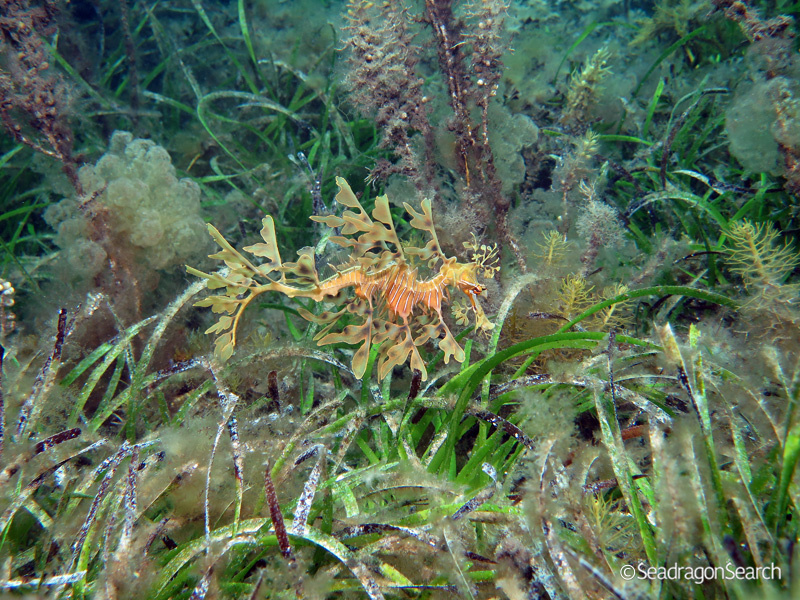 A recent study led by Dr. Josefin Stiller investigated the influence of changing sea levels on the genetic diversity and structure of leafy seadragon populations in South and Western Australia. Dr. Stiller did her PhD on the genetic diversity and structure of both weedy and leafy seadragon populations at Scripps Institution of Oceanography (UC San Diego). SeadragonSearch founders Dr. Nerida Wilson and Professor Greg Rouse are also authors on the paper, which appeared on the cover of Molecular Ecology this month.

In earlier work on leafy seadragons, the team had used mitochondrial DNA fragments and microsatellite markers, which are well established tools for extracting and analyzing genetic information. This showed some significant differences between populations from the western and central areas of Australia’s southern coast. While that data provided a first step in understanding the genetic structure and diversity of leafies, more high-resolution tools were needed to make inferences about what might have influenced the genetic make-up of different seadragon populations. They had a hunch that sea level changes had played a role, but they needed much more sequencing data to gain statistical power for making inferences about the relatively recent past. New DNA sequencing technology allowed them to target areas of the genome known as ultraconserved elements (UCEs). UCEs are like reference points: they are nearly identical among a wide range of animals, and don’t change very quickly over evolutionary time scales. By targeting over 1000 of these areas and then looking at the DNA variation flanking the UCEs, the research team was able to make more fine-scale inferences about the time period of interest.

The Last Glacial Maximum (LGM) occurred around 20,000 years ago, and at that time sea levels were about 120 meters lower than they are today. Leafy seadragons typically like to live in the upper 20 meters of the water column, where there is sunlight to support the kelp and seagrass habitats that they thrive in. Even minor changes in sea level could impact this band of shallow water habitat, let alone fluctuations over 100 meters. Looking at the southern coastline of Australia now, shallow water habitat spreads across the continental shelf, which slopes gradually into deeper water. However, when sea levels were 120 meters lower, plants and animals were pushed onto the steeper continental slope, which made a much more restricted shallow water habitat than today. Since the LGM, the amount of shallow water habitat available has increased significantly in central areas of the southern coast, while western areas have not changed as much. Dr. Stiller’s team investigated whether those geographical differences could also explain differences in genetic patterns between leafy seadragon populations.

Using the current bathymetry of the regions in question, the research team was able to model what the historical landscape would have looked like, dropping sea levels 120 meters in order to reconstruct and observe available habitat. Australia is a good candidate for this type of modeling, as it is geologically stable (especially since the LGM), meaning that few earthquakes would have moved the coast up or down since that time.

Seadragons themselves can be difficult to locate and sample in a study like this one due to their fantastic camouflage, but they are also good candidates because they don’t move far from small home ranges. This makes them attractive for studies seeking to understand recent changes in the environment because they can preserve patterns of isolation at small scales.

By expanding their scope and analysis of leafy seadragon genetic data, the team confirmed that genetic diversity and structure differ significantly between the western and central parts of the coast. The central area is home to large, shallow bays with extensive seagrass and kelp meadows, and each bay tends to have one or two populations of genetically distinct leafies. These bays were all flooded when sea levels rose, and the research suggests that each bay was colonized by one or two lineages of leafy seadragons which we are able to see today, and which show higher genetic diversity compared to the west.

In Western Australia, the genetic diversity of leafies decreases going westward, possibly because there was so little habitat left during the LGM resulting in the removal of seadragon populations from these areas. When sea levels rose, leafies would have recolonized this region from further east. Dr. Stiller explained that a source population would have expanded westward with just a subset of the genetic diversity of the original group, and then that population would have expanded with an even smaller subset of diversity, and so on, leading to recolonization of the west.

This type of work is important for conservation because these populations of leafies can now be monitored using genetic tools, and we can observe whether there are changes through time in genetic diversity. We also now have a more finely tuned understanding of where distinct populations are located and to what extent they are in contact with one another. Management strategies tend to be different when groups are genetically divergent, and genetic diversity is often seen as a proxy for the health of a population, affecting the amount of wiggle room a group has to respond to changes in the environment.

Dr. Stiller noted that it’s easy to forget how difficult it is to sample seadragons in the wild. Support from local divers and museums has been critical to her team’s work, and there is still so much more to learn about seadragons- every bit of information we can get about them is important.

You can explore the details of Dr. Stiller’s study by writing to SeadragonSearch for a copy of the paper: [email protected]

You can also learn more about the study in these video clips from Chrissy Tustison’s interview with Dr. Stiller: